It is driving me crazy having to post my photos without writing a proper blog at that same time because of my Blogger App issue on my phone that I told you about here. It is what it is though and if  it is the only way I am able to post, so be it. With that being said, on to the doll closet!

I am not sure if you recall or read back then but I made a doll closet as one of my very first doll projects. You can read all about it here. At the time, it was a great improvement over the storage I had been using for my doll clothes, which was a huge bag with them all thrown in willy-nilly. However, after time and using it, I was dissatisfied with the lack of space in it and the way I'd done the hangers, while useful if you don't have doll sized hangers in the house, started to annoy me with it's 'messiness' factor. So I'd been itching to do something new after we got moved and have been brainstorming it a while now... This is what I came up with.

Doll hangers are expensive!! I have purchased a couple of the kinds on the market to show you and will be back with that blog post at a later time. However, for the volume of doll clothes I have and wanted to hang, that was not really a possiblity because I am not spending the same amount on doll hangers as I could spend and get a really swell doll or ten depending on where I buy them! Um, no. So I had to find a cheaper option.

Enter Pinterest. What did we ever do before Pinterest? That's where I found this genius idea from the writer at Five Little Chefs blog! Genius!! I ran out and got a few packages of hangers at the Dollar Tree and then went back for a few more from Dollar General (they are actually cheaper, per hanger, from Dollar General and I am all about saving money!) In her blog, she mentions needing to sand them but my husband had a pair of snips that made a very clean cut with no rough edges and so I just left mine as is. 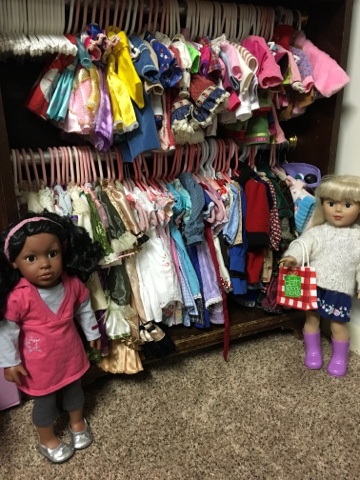 Here we have Sueretta and Shuri standing in front of the closet. It was an antique bookshelf in it's prior life, a bookshelf that belonged to my husband's grandma. I was reticent to use it for a doll closet until I got my husbands permission but he was totally cool with the re-purpose! Woot! I just got two dowels cut at my local hardware store and used the cup type holders at each end to hold them up. These are the sorts of holders I am talking about. I bought two sets, obviously. I measured the bottom one first with the longest of all my doll dresses to make sure the lower bar could hang my long dresses and the top bar I put as high up as possible and it is good for shorter dresses and shirts. 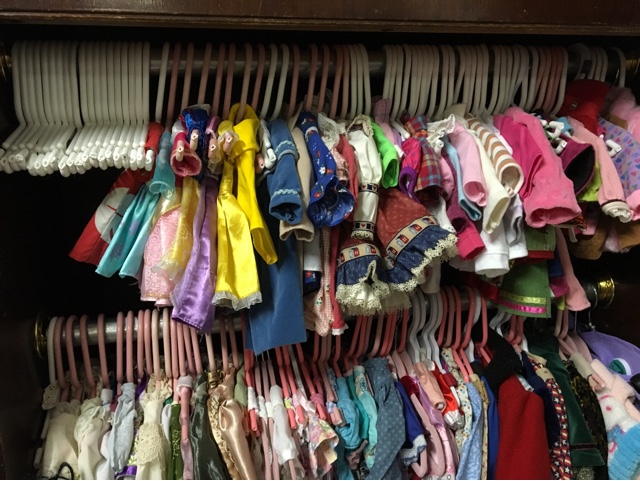 I love love love it because it shows all my pretty doll clothes off even when they aren't being worn. I had originally planned on putting up a curtain over the clothes with a tension rod but I have begun to think I might just leave it open because it's pretty, I think. What do you think? 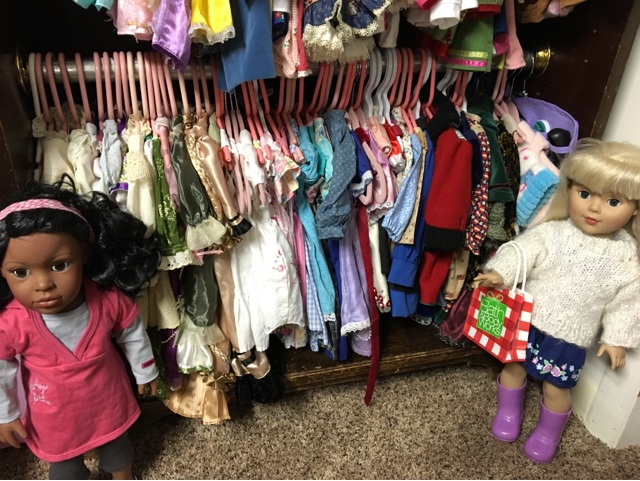 Clearly I need to thin out my doll clothes collection. I have over a hundred dolls, all fully dressed when this was taken and still had this much to hang up. That's crazy. I actually pulled out about 10 or so of my least favorites and plan to put them up on eBay. Any money I get I can reinvest in dollies!! Woot! 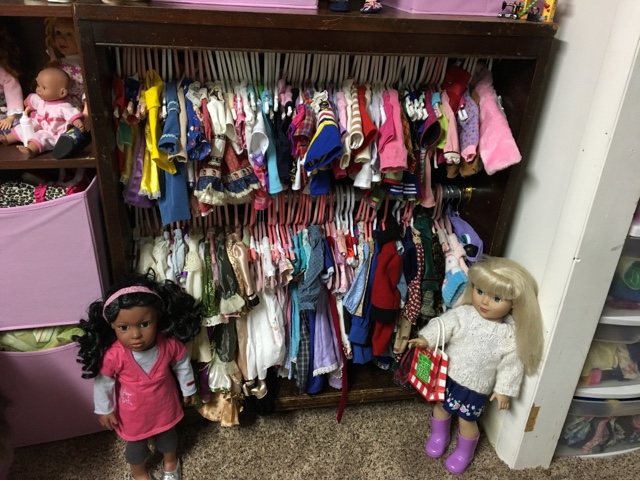 That's it for now Doll Friends!!
Till next time!
XXOO
Heather

Posted by Heather from PennilessCaucasianRubbish Dolls Blog at 4:07 PM

Heather from PennilessCaucasianRubbish Dolls Blog
I love Jesus. I love my husband & our two kids. My life is about them. Also I blog & practice yoga.

Blogs and YouTube Channels I Love and Visit Often!